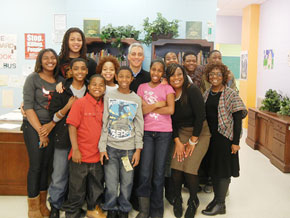 Mayor Rahm Emanuel congratulates members of Team Stop the Violence from the Institute for Positive Living (IPL)/Chicago Lawless Garden Male Mentoring Program on winning second place in the Violence Stops Here Contest on January 6, 2013. The Mayor stopped by IPL’s Technology Center, 3620 S. Rhodes, to have lunch and talk with the youth about school and their neighborhood. Also pictured are IPL Founder and President Marrice Coverson and IPL Program Director Chimere Bias (front, right) 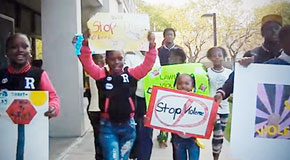 Male Role Models can look forward to working with students on exciting projects like this “Stop the Violence Campaign” video that was created and produced by youth at the Lawless Garden’s site of the Institute for Positive Living’s Male Mentoring Program. The video won second place in the Violence Stops Here Contest sponsored by Violence Stops Here, a community-driven new media campaign. Call 773-924-9803 for information.

Mayor Rahm Emanuel congratulated youth from the Institute for Positive Living (IPL)/Chicago Lawless Garden Male Mentoring Program on winning second place in the Violence Stops Here Contest during a lunch on January 6, 2013 at the IPL Technology Center at 3620 S. Rhodes. The Violence Stops Here Contest was sponsored by Violence Stops Here, a community-driven new media campaign that spearheads the presentation of relevant messaging for positive influence. It combines social media technologies and grassroots collaboration to empower residents, community organizations and businesses to promote responsible and safety in the community.

The Violence Stops Here Contest invited youth from Chicago’s Southside communities to demonstrate through original spoken-word or song, their ideas illustrating how they view non-violence in their community.

In preparation for the contest, the IPL/Lawless Garden Male Mentoring Program brought together a group of young students calling themselves Team Stop the Violence. The team wrote, edited and produced a lively “Stop the Violence Campaign” video featuring residents from Lawless Garden. The video, which can be viewed on YouTube at (http://www.youtube.com/watch?v=oUBb7dN67_k) or at (http://www.violencestops.com), sends a strong anti-violence message. It starts with the camera panning the Lawless Gardens high-rise as the voice of a news anchor states, “We going to take you now to Chicago where this past weekend at least 52 people were shot, eight of them killed in a wave of violence across the city.” As the video progresses there are scenes of children playing, the camera panning in on a stop sign, and then the youth coming together as one voice, with one message in an original music rap that goes: “Stop, Stop, Stop, Stop, Stop the Violence!”

Members of Team Stop the Violence who got a chance to meet Mayor Rahm Emanuel on January 6th included Kevin Blackwell, Trevion Conner, Aderral King, Shakira Matthew, Antwan McCray, Dearis Mosses, Dedria Mosses, Dedrick Mosses Javanta Tolbert and Thomas Watson. The Mayor came out to meet the students personally. During lunch he talked to the students about school and their neighborhood.

“We are so proud of our Male Mentoring Program members,” states IPL Founder and President Marrice Coverson. “The youth in this program are trying to do positive things in their lives and in their community. Winning second place in this contest helps them know that they can and will succeed. By visiting our Institute for Positive Living Technology Center and sitting down for lunch and conversation with our youth, Mayor Rahm Emanuel is demonstrating his care and concern for the children and families of this community.”

The Institute for Positive Living is a non-profit 501 (c)3 organization that focuses on literacy, mentoring of young African-American males, closing the digital divide for families in underserved communities, and health education. In addition to the Male Mentoring Program, IPL’s other programs include Open Book, Technology Learning Lab, HIV Awareness and School Based Counseling. For more information, go to (www.openbookprogram.org) or call 773-924-9802.

You May Also Enjoy

Check out these photos from the Open Book program’s most recent trip to the Puerto Rican Cultural Center and various landmarks in Humboldt Park! ...

Check out these clips from the Institute for Positive Living’s most recent Peace Planters Project march and cookout! ...

The Open Book Program is looking for mentors - call Chimere Bias at 773 924 9802 for more information.