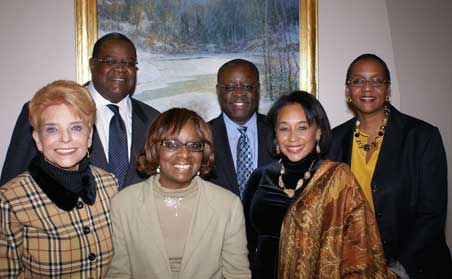 Lester L. Barclay, Attorney/Author, The Barclay Law Group, Marlow Colvin, Vice President, Governmental Affairs, Commonwealth Edison, Sonya Malunda, Senior Associate Vice President for Community Engagement, The University of Chicago, and Judy Baar Topinka, State of Illinois Comptroller, were honored for making a difference in the lives of Chicago children and their families during the Annual Institute for Positive Living Fundraiser on January 30, 2014. The Institute for Positive Living fundraiser kicked off with a gala reception at the University of Chicago’s Quadrangle Club. Then a attendees took a Trolley ride to the Court Theater, 5535 S. Ellis Ave., where they saw Seven Guitars by August Wilson.

The honorees received gold Tiffany bookmarks commemorating Institute for Positive Living program including Open Book, an after-school program that inspires the love of reading in students. The gifts were presented by IPL Founder and President Marrice Coverson and the event’s Mistress of Ceremonies, Deborah Crable of DJ Crable Enterprises, Inc.

“In keeping with the Institute’s mission, we honored four outstanding individuals who make a difference in the lives of Chicago children and their families,” stated Coverson. “In addition, we thank all of our sponsors, contributors and those who purchased tickets for helping to provide the vital funding that will contribute to the continuation of IPL’s vital safe haven programs including Open Book, Male Mentoring, Community Technology Center, Health Community Outreach, Entrepreneurship, Parent Education Center and Youth Working for Success.”

Coverson stressed the important contributions that the honorees have made including:

Lester L. Barclay, Attorney/Author, The Barclay Law Group: “The Institute for Positive Living believes that one can navigate many things in life just by having knowledge,” stated Coverson. “We believe that books contain knowledge. Attorney Lester L. Barclay has chosen to share his knowledge by empowering individuals through his writing.” Barclay is the managing partner of The Barclay Law Group in Chicago, Illinois. He is also the author of The African American Guide to Divorce and Drama: Breaking Up Without Breaking Down.

Sonya Malunda, Senior Associate Vice President for Community Engagement, The University of Chicago: “For over 10 years, the University of Chicago’s Sonya Melinda has supported the Institute of Positive Living’s programs and activities including the IPL/Open Book Reading Festival that was held on the U of C Midway for a number of years,” stated Coverson. “Sonya has also been a great help by securing of space, etc. for IPL’s fundraisers.” Malunda has served in various roles in civic and community affairs for the University of Chicago for more than 15 years and currently manages the Office of Civic Engagement’s civic partnerships portfolio. She is responsible for local and state government relations, community and civic partnerships, and education outreach programs.

Judy Baar Topinka, State of Illinois Comptroller: “Judy Baar Topinka supports IPL’s determination to do everything in our power to save our young men by preventing them from entering the Juvenile justice system,” said Coverson. “Judy also works tirelessly with non-profits to help us with our cash flow efforts.” Prior to becoming Comptroller, Topinka served as the Illinois State Treasurer from 1994 to 2007. She was the first woman in Illinois history to hold the post, and made history again by becoming the first State Treasurer to be reelected to three consecutive terms. 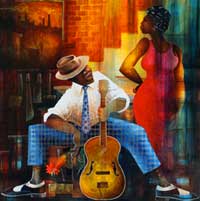 Other highlights of the Annual IPL Fundraiser included a silent auction, Vocalist Alisa Sims and Hors d’oeuvres. The centerpiece of the evening, August Wilson’s Seven Guitars, received a standing ovation. Seven Guitars, August Wilson’s haunting Century Cycle play about fate, justice, and the Blues. In the backyard of a Pittsburgh tenement in 1948, six characters gather to mourn the missing seventh: Floyd “Schoolboy” Barton.

Barton, a blues guitarist with feet of clay who died with fame and celebrity just beyond his reach. Stitched with vibrant swatches of American blues lyrics and harmonized through a seven-piece ensemble, Wilson’s signature voice is at its richest in Seven Guitars as it seeks to explore the disappointingly dissonant harmonies we sometimes find in the circular nature of hope, violence, fate, and justice. 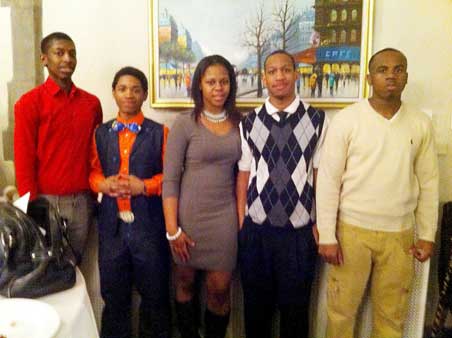 Special thanks are also in order to the young people from the Institute for Positive Living who lent their helping hands at the Annual IPL Fundraiser event. Pictured (l-r); Norman Wade, Brandon Walton, Sheryl Cabil, Anthony Hughes and Robert Mosley.

You May Also Enjoy

Check out these photos from the Open Book program’s most recent trip to the Puerto Rican Cultural Center and various landmarks in Humboldt Park! ...

Check out these clips from the Institute for Positive Living’s most recent Peace Planters Project march and cookout! ...

The Open Book Program is looking for mentors - call Chimere Bias at 773 924 9802 for more information.